Welcome back.  Here's the latest news and happening at the AT Museum

Nominations are now open for the 2014 class of the Appalachian Trail Hall of Fame.  Nominations will be accepted until February 28, 2014.  The nominees should be people who've made a significant positive contribution to the AT.

The easiest way to submit a nomination is by using the online form.
Nominations may also be submitted using our paper form.  Instructions on where to send the form are on the form.
The Hall of Fame has been very successful during its first three years.  We've received hundreds of nominations from throughout the Appalachian Trail community and the general public.

Hours of Operation for 2014 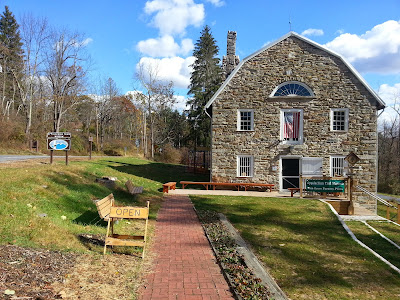 Each Sunday, during the museum season, the Programs Committee schedules an educational or entertaining program that highlights the museum, the trail or some other local or interesting topic.  Some of our past programs have been authors and artists whose products we sell at the museum, others have been storytellers and interesting people who do exciting things.  The possibilities are boundless, but booking the speakers takes a lot of work.

Gwen Loose, our current Programs Committee Chairman has been heading the programs since they were conceived.  She is hoping to take a step back and let someone else head the group for the upcoming year.  She plans to be fully involved as usual, but would like someone else to take the lead.

Happenings and Doings at the Museum

The Museum may be closed for the season, but that just means that we are making sure everything is safely stored away for the winter and we are getting ready for next season.  I have been heading up to the museum at least once a week to do small jobs and checking to ensure all is well in the building.

On November 26th, the more delicate items in the exhibits were removed by Graphik Masters Studios to be stored for the winter.  Also on that day, I shut off the water to the building and drained all the pipes.  We will try to maintain some warmth in the building throughout the winter to keep the deterioration of the wall mounted items to the barest minimum.

The work on the second floor ramp is almost done with phase one and will be continued in the spring, when the weather shifts back to a more agreeable outdoor work environment.

I will continue to monitor the building and its contents throughout the winter season and plan on heading up there on a regular basis.  I love the drive up from the congested city in Maryland to the beautiful rural atmosphere of south, central PA.  The transformation is wondrous.

I am always looking for new volunteers to help with all the things that need to be done at the museum, from acting as a Docent/Greeter, to cutting the grass and doing other duties that are required to keep the museum up and running.  As always, this is something that can't be done alone.  Therefore, I have proposed a Volunteer Referral Program with rewards to those who pass the word and stir up the excitement of volunteering at the museum.


I have already talked to prospective volunteers who heard about being a Docent from someone who is already serving.  It is a great way to grow our force of volunteers and keeps our reserves fresh.

We are still working out the details of what we will present as awards, but it will most likely be a multi level award system consisting of credit towards the museum store, or maybe even gift cards for local restaurants or other shops.  Your ideas are welcome.  What would you like to receive for your efforts to expand our volunteer workforce?
______________________________________________

Posted by EarthTone LoGear at 9:33 AM