Most of the Northbound hikers have come through the park and the bubbles are starting to get smaller.  Next week, we scale our hours back some and will only have one shift a day.  The park is still very busy during this time, so we look forward to many visitors coming through the Museum and seeing its wonderful exhibits.


History Runs by the Museum

Little did I know when I showed up for my shift at the A.T. Museum on Thursday afternoon, June 18th, that a little bit of trail history was about to descend on us that day.  While morning docent Jennifer Wright and I visited and prepared to switch shifts, a middle-aged couple arrived at the museum on their way home to Maine from Florida, and reported that they were there to watch for the arrival of 41 year old Scott Jurek, a super athlete and ultra-marathoner, currently on the Appalachian Trail with the goal of beating Jennifer Pharr Davis' previous trail completion record of 46 days, 11 hours, and 20 minutes, set in 2011.

I hadn't heard about this endeavor, but these folks filled us in on the details.  Their son is a serious trail runner from York, PA, who has been closely following Scott's progress on the trail since Scott started at Springer Mountain on May 27th, just 22 days prior.  The whole family is now engrossed in following Scott's progress via Facebook, and they are rooting for him all the way - hoping to be at Katahdin in their home state when Scott achieves his goal.  Their son was on his way to Pine Grove Furnace Thursday after work, in hopes of meeting Scott in person.  He had hoped to run some of the trail with Scott, but an injury would prevent that from happening this time.  The parents spoke highly of Scott, his sincerity, his capability, his strength and endurance, and they said he was a world class athlete - one of the top runners in the USA - winner of many prestigious running awards, but a very down-to-earth and genuine guy.  He is also author of the book "Eat and Run" and a vegan chef for the purpose of enhancing athletic strength and health.  He had started on the trail Thursday morning at Penn Mar and was on his way north - running 50 miles and sometimes more each day on the A.T.  No one knew exactly how long it would take him to get to Pine Grove, but they would wait for him to arrive and see history in the making, despite the threat of rain.

Docent Jennifer Wright decided to hike south on the trail in hopes of seeing Scott as he was coming north.  I continued to staff the museum, looking out the door frequently so I didn't miss any of the excitement.  Throughout the day, more people showed up in anticipation of Scott Jurek's arrival at Pine Grove Furnace State Park.  Around 2:30, a radiant, energetic young woman with long, dark hair came into the museum during a lull in visitors and signed in to the visitor's log as Jenny Jurek - trail name "Raven."  I asked her if she was a hiker and she indicated that her husband was running the trail.  It didn't take me long to figure out that this was Scott Jurek's wife, providing the support he needs in order to succeed in his record-setting endeavor!  I was honored to have her there and we had a great visit.  I learned that they are from Boulder, CO. and that he had suffered an injury early on his A.T. challenge, but he had healed up and was back on track.  I especially enjoyed studying the strip map of the A.T. with her - discussing the terrain to come and the terrain he had already accomplished.  Jenny wasn't quite sure when Scott would arrive at the park.  She had last seen him at the A.T. halfway sign.  She bought an A.T. Museum Halfway patch as their souvenir and had a good look around the museum before she left.

In the meantime, a brief drenching downpour arrived, and shortly thereafter, a very soggy Jennifer Wright returned from her hike.  She had not run into Scott on the trail, but word was traveling on the trail and we expected him to arrive soon.  At about 3:50 pm, Scott Jurek arrived at Pine Grove Furnace State Park, running with a small handful of fans he had picked up along the way.  There were about 15 people waiting his arrival at the park and all gave a cheer of support.  There was a lot of excitement at the park.  Thankfully, there were no visitors in the museum at the time, so I was able to go out to be part of what was happening.  Scott ran right over to their support van in the PGF State Park store parking lot - a very modern black van painted up with the names and logos of their supporting companies.  Painted on the door of the van were the words "Scott Jurek - Eat and Run."  Jenny was waiting there with nourishment and support.  His awed fans stood back while he had a few minutes of refreshment and recuperation.  In a short time, he came around the van and started walking on the trail toward the museum, very amiably taking a few minutes for several photos with his fans.  I was out there with my cell phone camera - hoping to get a decent shot or two for the museum.  Jenny wanted to get their photo taken in front of the museum, so many cameras were clicking as they posed by the old halfway sign out front.  Scott apologetically said that he couldn't take the time to visit the museum that day, but his wife had told him how nice it is and he promised to come back to visit the interior the next time he is in our area.

With that, Scott got back on the trail and continued his journey, Jenny at his side for a few minutes and accompanied briefly by his excited fans and supporters, and still eating his dinner from a paper bowl.  His goal that day was to make it to Boiling Springs where he would spend the night in the support van.  (Penn Mar to Boiling Springs in a day!)  He seemed truly to be a personable and friendly guy and he picked up a few more fans that day who hope he succeeds in his goal!


Volunteer Picnic is Getting Close

The Picnic and its needs are coming together nicely.  Most if not all of the required items have been signed up for and it looks like we will be seeing a couple of new faces in the crowd.  I hope to see as many of you as possible who give their time to the Museum and look forward to talking to new, interested volunteers.

This gathering is not a replacement for our End of Season Volunteer Appreciation Dinner, but rather an opportunity to get to know the other docents.

Who is invited?
Docents and their family, museum volunteers and anyone interesting in becoming a docent. If you know of someone who is interested in becoming a docent, bring them along. We are always on the lookout for additional help.
Hope to see you on the 25th.

The last month has been full of festivals, picnics and the usual summer storm.  Here is a quick update on some of them.

On June 20th, Waynesboro, PA had its first Hiker Festival in Red Run Park.  There were many vendors with food and interesting things for sale and plenty of musical entertainment.  I attended to represent the Museum and got to talk to many of the hikers that had been brought in from the nearby trail crossing of Rt. 16 by the numerous volunteers.  It was a very good time and Waynesboro is doing everything right as one of our newest AT Trail Towns.

Our annual Hiker Picnic in cooperation with PATC was another success.  We had at least a dozen hikers enjoy our food and everyone in attendance had plenty to eat.  I got to hear a few interesting stories from the hikers as they make their way along the trail to their final destination of a mountain far away.

The usual summer storms are running through the valley as they always do, but we had a doozy right around the Summer Solstice.  I was at the museum when an unusual storm came over Piney Mountain from the South.  It seemed an inch of rain was falling every minute and the power eventually went out for the night.  The next day as we were preparing for Howard's Canoe Presentation, I opened the basement door and was greeted with this:
I was able to clean it up with a hose and broom, but we are now worried that this could happen again and have had some experts come in to advise us on how to prevent it in the future.  On a good note, we have had numerous heavy storms since that event, without a recurrence of the flooding.  I'm hoping it was a fluke, but we will continue to go forward with ensuring this doesn't happen again, especially after we get our amazing new exhibits installed for the children's area.
____________________________________________

On Monday, July 6th, we had the pleasure of hosting a special Program presentation by Trail Legend Warren Doyle.  Warren is traversing the trail one more time with his group officially known as the Doyle Expedition (I overheard a hiker refer to them as Doilies.  I really like that term and have been using it since.  They don't seem to mind)

Warren talked about his 43 year love affair with the trail and how he has managed to walk the trail 16 times for something over 34,000 miles.

Afterward, I invited him and anyone attending the presentation up to the Ironmasters Mansion for an encore screening of the wonderful Chris "Frost" Galloway movie, The Long Start to the Journey, which had been our Sunday Public Program the day before.  Warren has been a strong supporter of Frost from the beginning and he hadn't seen the movie yet.

As the sun moves west each day, it beats mercilessly on the front of our building and on the flag that is hanging in the upper door.  This of course, causes some fading of the fabric of the flag.  Georgia "TGIF" Freet has provided a new flag for the second year in a row and delivered it just before our Country's annual July 4th celebration.  It sure looks good. Thanks TGIF for making the face of the Old Mill look as great as your flower gardens along the path. 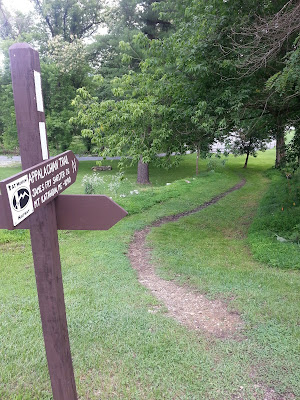 Posted by EarthTone LoGear at 9:13 AM