The recent weather is confusing to me.  With only a few days until the winter solstice arrives, I'm wanting to see some snow.  60 degree days are for spring and early fall, not winter.  But the off season continues.  For me, that means, buying stuff to sell next year.  Work on maybe cataloging the artifacts we accrued this year and updating the Docent Manual and the other things I use to do this job.  The down time is needed, but I'm always needing to get into the woods during every season.  So I squeeze in what I can with the Holidays going on, and continue to have that itch that always needs to be scratched.
____________________________________________

A few weeks ago, I received an email telling me that Niki "The Bionic Woman" Rellon would be hiking through the park in a few days and they were wondering if we could open the Museum for her as she came by.  If you don't recognize her name, she is an amazing woman that has been hiking the trail this year.  What makes her special, is when she completes (somewhere down in Virginia), she will be the first female amputee to complete a Thru Hike.  Niki is an amazing outdoorswoman, who lost her leg after a rappelling accident in Utah back in 2013.  You can read a little about her on Robert Sutherland's blog.  Her story is quite interesting.

So this was right around Thanksgiving and one of our amazing volunteers, this year's Volunteer of the Year, Michele "Amma" Burton, agreed to be on standby (others volunteered to, thanks to all who offered to help) for her arrival.  As you know, hiker schedules can be erratic and you never know exactly when a hiker will arrive.  Their time tables are usually quite flexible.  Having a "local" around really helped me out.

So, Niki did come by and Amma was able to come down and show her the Museum and Amma being the Trail Angel she is, also went well beyond that with her help.  She brought here a big turkey sandwich that day then took her on a food run the next day then brought her home so she could clean up and have a nice bed for the night.  Niki, a German girl, cooked up some stroganoff for a nice meal


The Halfway Point: Moving through PA since 1937 or so

You all know that "AT Halfway Point" is pretty much our claim to fame here at the AT Museum.  Pretty much on a weekly basis, I have the question about the Halfway Point and when I mention that the point moves, pretty much every year, because the trail length changes pretty much every year, I have devised a little Primer on the whys and wherefores of the living trail that we love so much.  Here is a little bit of information that I have gathered and try to pass on to our visitors when they inquire as to why the trail length changes and therefore why the halfway point moves.

Back in 1937, when the "completion" of the AT was determined, there was a small knob just outside of Boiling Springs, PA that was named Center Point Knob and a bronze plaque was placed on a nice white rock in the middle of the trail.  The official length at this time was 2049 miles according to Publication No. 5 - 3rd edition.  The Mountain Club of Maryland was pretty proud of this point and tried hard to keep the official trail length the same, so the point wouldn't move.  But sometimes reality doesn't comply to peoples wishes.


So, the reason the trail's length changes, is because the trail will never really be "complete"  There is always somewhere along the trail that needs attention.  It might be a large re-route that changes the length, or maybe a club will add some switch backs that improve the erosion control along a steep part.  Lately, I have been seeing that a simple re-measurement reveals that what was once thought of as being a .4 piece of trail, was actually .6 or something.  Things change.  So, long story short, the trail is a living trail.  Always changing in length.  Sometimes more, sometimes less, but always changing.

When the trail length changes, so does the Halfway Point.  There have been a few more "permanent" markers along the trail marking the Halfway Point, but they never were accurate for more than a year or maybe a couple.  Now, long distance hikers like to have their little celebrations during their months long hike.  Getting halfway done of an over 2000 mile long trail is one of those events.  They like to know when they are "there".  They dance their dances, sing their songs, then continue on, maybe taking on the Half-Gallon Challenge at the General Store in the Park.

You have probably seen the marker we have outside the Museum.  This marker used to be about three quarters of a mile up Piney Mountain that rises up behind the Museum and was placed there in 1987 by 1985 Hiker Wood Chuck (the same guy who made the Museum's sign)  This marker stood up on that mountain for a couple of decades and was used in many celebrations and pictures even though the point had moved on to somewhere else.  At that time the trail length was 2138 (according to the math on the sign).


The next sign the PATC put up was in 2011 (also made by Wood Chuck) and is still standing about 3.5 miles south of the Museum.  This sign adds up to 2081 miles, so you can see that generally the trail has been growing as the years go by.


Back in 2013, when I got involved with the AT Museum and started spending more time on the trail in the area, I came across a place on the trail that was that year's Halfway Point.  There was no official marker, but the hikers had taken it upon themselves to create one.  They had made a small circle of rocks (very abundant material in our state) and formed a 1/2 inside the circle.


This formed an idea in my head.  I decided to help the Hikers out.  Each year, the ATC announces the Official Trail Length and the various AT Guide makers calculate where the Halfway Point is for that year and publish it in their guide.  I decided to take that information and create a place for hikers to mark their actual completion of half of the trail.  I made a small sign and laminated it and placed it in 2014's Halfway Point and the hikers came and did their thing.  It was kind of rinky dink, so I got mixed reviews, but that of course, left lots of room for improvement.


The hikers would fix it up from time to time with their duct tape and it did last the season.  I asked Vern Graham, one of our Road Scholar Hike Guides if he could make something more substantial and he didn't disappoint.


So this year, I placed my second movable, temporary Halfway Marker along the trail for hikers to enjoy.  The point was right where the trail crosses Dead Woman's Hollow Road.  This year I added a register so the hikers could record their thoughts.  I removed it for the winter in November.

The Official Length has been announced for the 2016 Season and the trail shrunk just a tad (.1 mile) and the Halfway Point moved a bit back to the North about .2 miles.  I will be placing an updated sign some time after the snows melt next year (if the snows ever come that is)  It will be along the old forest road that heads to the PATC Anna Mitchner cabin.

A little while ago, Larry Luxenberg and Jim Foster were contacted by Longwood Gardens about getting involved with a Community Read Program they were planning.

The Gardens are this huge place near Philly in Kennett Square, PA and it is a wonderful place to visit that is open 365 days a year and something is always in bloom.  I hear their Holiday decorations are over the top.  A Community Read is when they pick a couple of books on a certain topic, one that would appeal to adults the other to children and promote events throughout the area.  For this next read, they picked Grandma Gatewood's Walk to promote and asked if we wanted to be involved as we represent the Trail in the area. 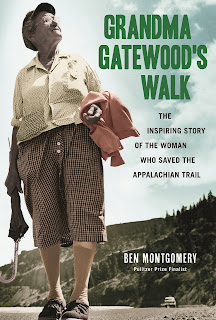 A few days ago, Larry and I met with a group of librarians from the local area along with a representative of Longwood Gardens and discussed the program and the things we can do.
The program is set to kick off in early January and most of the events will be in March and April.  We will be providing speakers to the local libraries and hopefully have an event or two ourselves in the Spring.  We will be sending out more information as the program continues.

Just a quick update on the second floor ramp.  We are getting close.  Here are a couple pictures of where we are stopping for the winter.  I can already envision how it will look when the faux bridge is finished up and we get all of our plantings around the ramp.  I think it will look good and will blend into the environment and building.

Posted by EarthTone LoGear at 10:42 AM