You can see from the picture below, that the seasons wrap around the museum like a comfortable blanket.  I have been around long enough now to have taken pictures from each of the four seasons and I have found over the last nine months or so, that the old mill is a favorite subject of mine.  This is one of five new postcards that we are now carrying at the museum for purchase.  We were able to add these new postcards due to a grant from Conquest Graphics.  I think they came out rather well and visitors are starting to snatch them up already.

As the museum grows and matures, we are constantly in need of experts and other professionals and their unique skills.  The following is a list of people/things we are seeking to help with the expansion and continued upgrading of the museum.  If you can help, or you know someone who may be willing to help, please let me know or pass this on.

1.  A plumber/HVAC professional to install two heat pump systems to provide the museum with year round climate control as part of the current renovation projects.

We have secured a space at the Rovegno Building in Carlisle.  It is much bigger than the other one and should take a little while to fill up, but we are always looking for more.  Especially climate controlled space.

3.  A Public Program Chairman to run the Sunday Afternoon Programs.  (A team of two or three would be the best makeup, but we need to start with someone taking the lead)

4.  Someone to video the Public Programs and events such as the Hall of Fame Banquet.

Docent Stories continues this month with a story told by Miclele Burton.  One of the things I love about this job is the stories I hear, not only from the hikers, (which are always interesting), but from the people who greet the visitors, our Docents.

Since working at the AT Museum and attending the hiker picnics this summer I have often heard that Thru hikers like fresh fruit.  When peaches and nectarines came into season this month of July I decided to buy an assortment of peaches, both white and yellow, and nectarines, along with some nice sweet cherries.

I brought them to the hikers box on one of my shifts at the museum. It happened to be a day when many Thru hikers where passing  by. There were at least 12 the first hour who came to the museum and a number of them sitting at the general store. When the first hiker saw the fresh fruit you would have thought she discovered gold. “FRESH PEACHES!” she exclaimed in glee. She picked it up and rubbed it with admiration before relishing her first bite.

Soon a few more came to grab the fresh produce. One hiker left with his ripe peach in hand, savoring every bite as he headed over to the store. Before I knew it there was a parade of hikers coming to indulge in a morning treat! Who knew such a simple gift could make a hiker so happy?

That day a few hikers lingered on the sofas connected to the wifi , looking at the book exchange and just simply relaxing . The girl who discovered the peaches earlier looked at me and said “This is the perfect day! WiFi, seeing this wonderful museum and eating a delicious peach! What could be better?”

Indeed, what could be better? It is the simple gifts of life that bring real joy! Especially when hiking the AT.

For me, it was a joy just watching these hikers enjoy their day.
Michele Burton


Earl Shaffer Exhibit and A Grip on the Mane of Life

On August 3rd the Museum officially unveiled the new Earl Shaffer exhibit within the old Peter's Mountain Shelter in the museum.  The exhibit looks great and this hiker (5-Hour) was the first visitor to see the new display when it was installed on July 31st.  You can see that Graphik Masters is still working on the installation and the final touches haven't been placed yet.
August 3rd also was the day we released our newest publishing effort.  A Grip on the Mane of Life: An Authorized Biography of Earl V. Shaffer.  David Donaldson, one of the co-authors was on board to discuss Earl and the writing of the book.  We had six copies on hand and ended up selling 17.  We offered free shipping for anyone who wanted to purchase that day and David came back the next Sunday to autograph all the purchases after we received our shipment of 1000 books.  Yes, my basement does look like a warehouse now.

The end of July had Mark Wilson and Tom Jolin doing their very nice Family Concert of traditional music and clogging.  It was well attended and the kids seemed to enjoy the show.


The day was perfect and the little shady area near the fire ring has become a popular spot for our Program Presentations.

The last scheduled program of the season was August 10th and it found Larry Luxenberg, Erich Shellenberger and Richard Judy at the Museum to discuss what it was like to hike the trail back in the last century, specifically 1973 and 1980.  It was a nice free flowing discussion on how things have changed with the advent of smart phones, ultralight gear and the Internet.  Can anyone even find a pay phone anymore?

The day was also eventful as David Donaldson came by with his kids, Curtis and Katy to sign some books and it was nice having two of the three AT Museum Authors in house, David and Richard Judy.

Katy and her doll Lagoona helped out with the modeling of our two publishing efforts.

Last month saw the addition of coffee mugs, this month saw some new postcards and a new Halfway Bandana, specially made for the Museum.  We are also now carrying the book Grandma Gatewoods Walk and Railroads of Pine Grove Furnace. 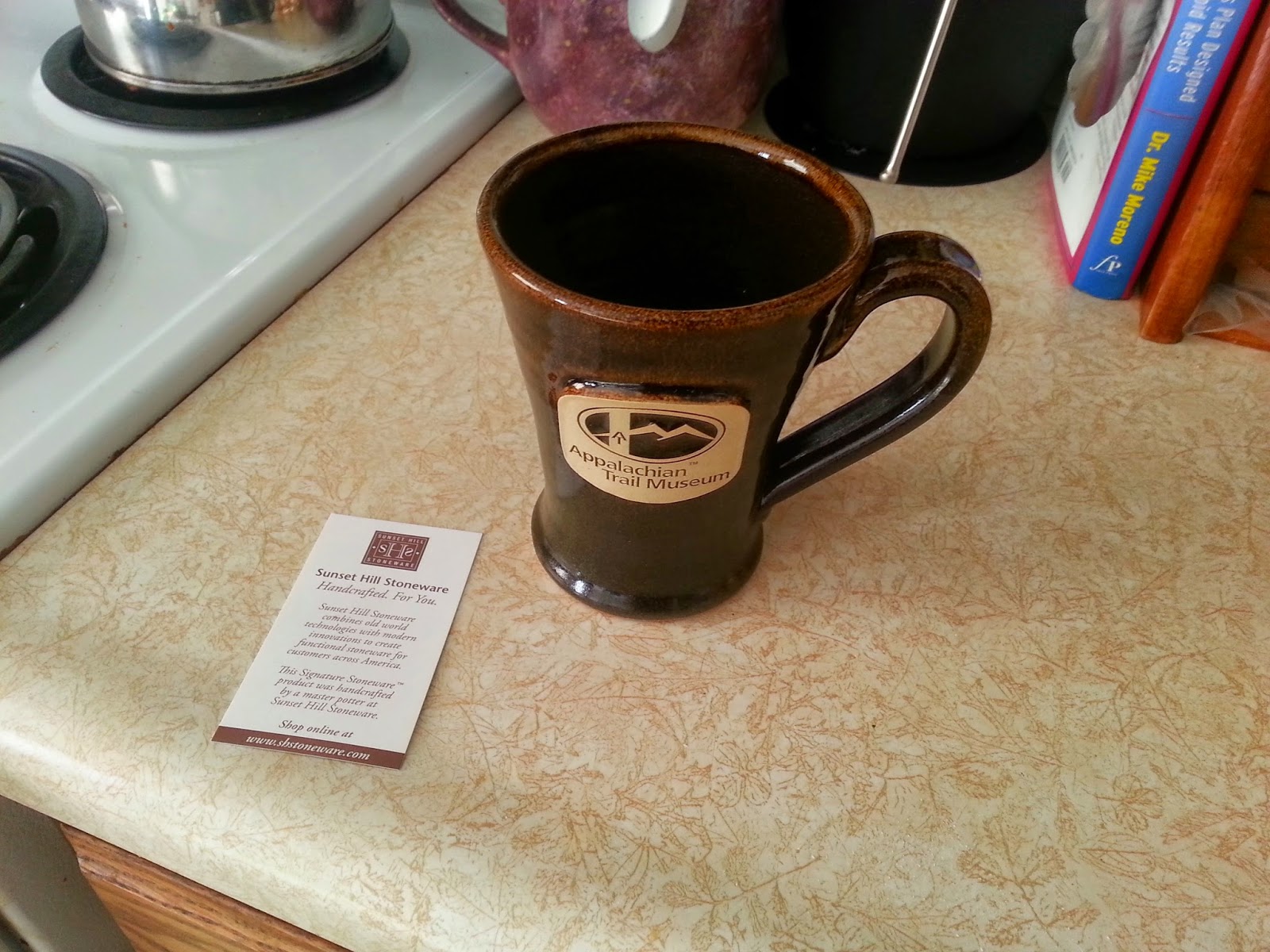 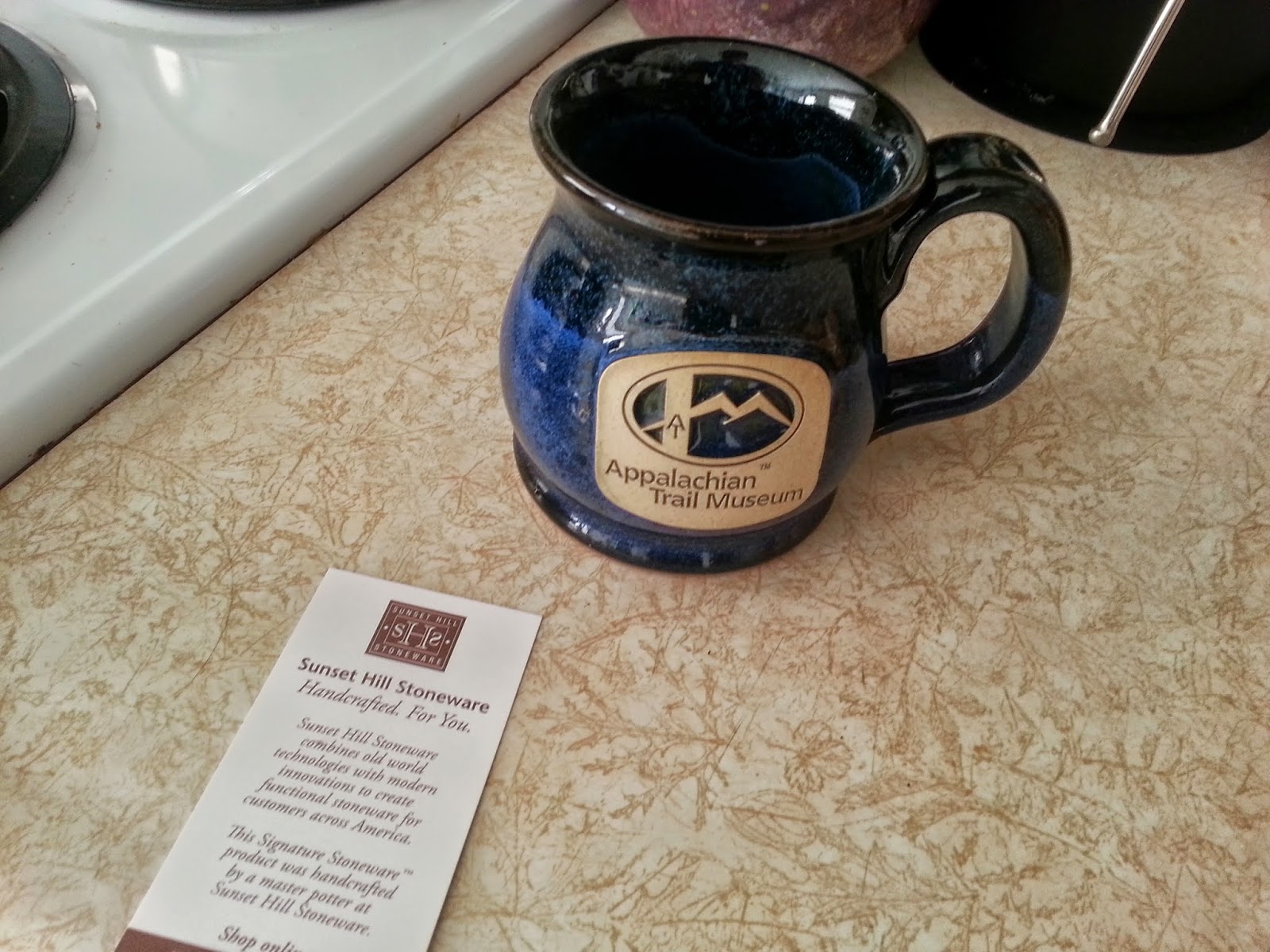 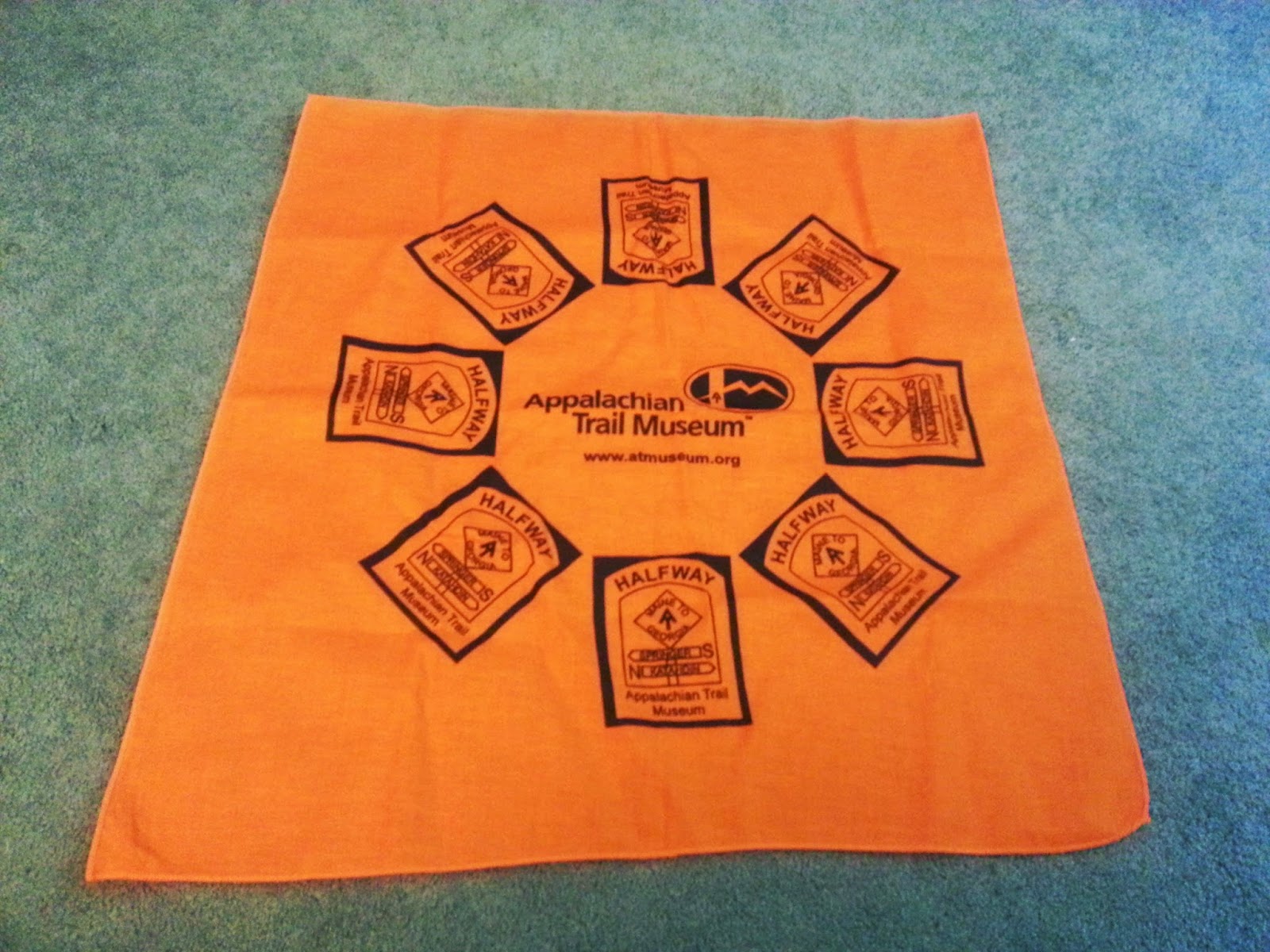 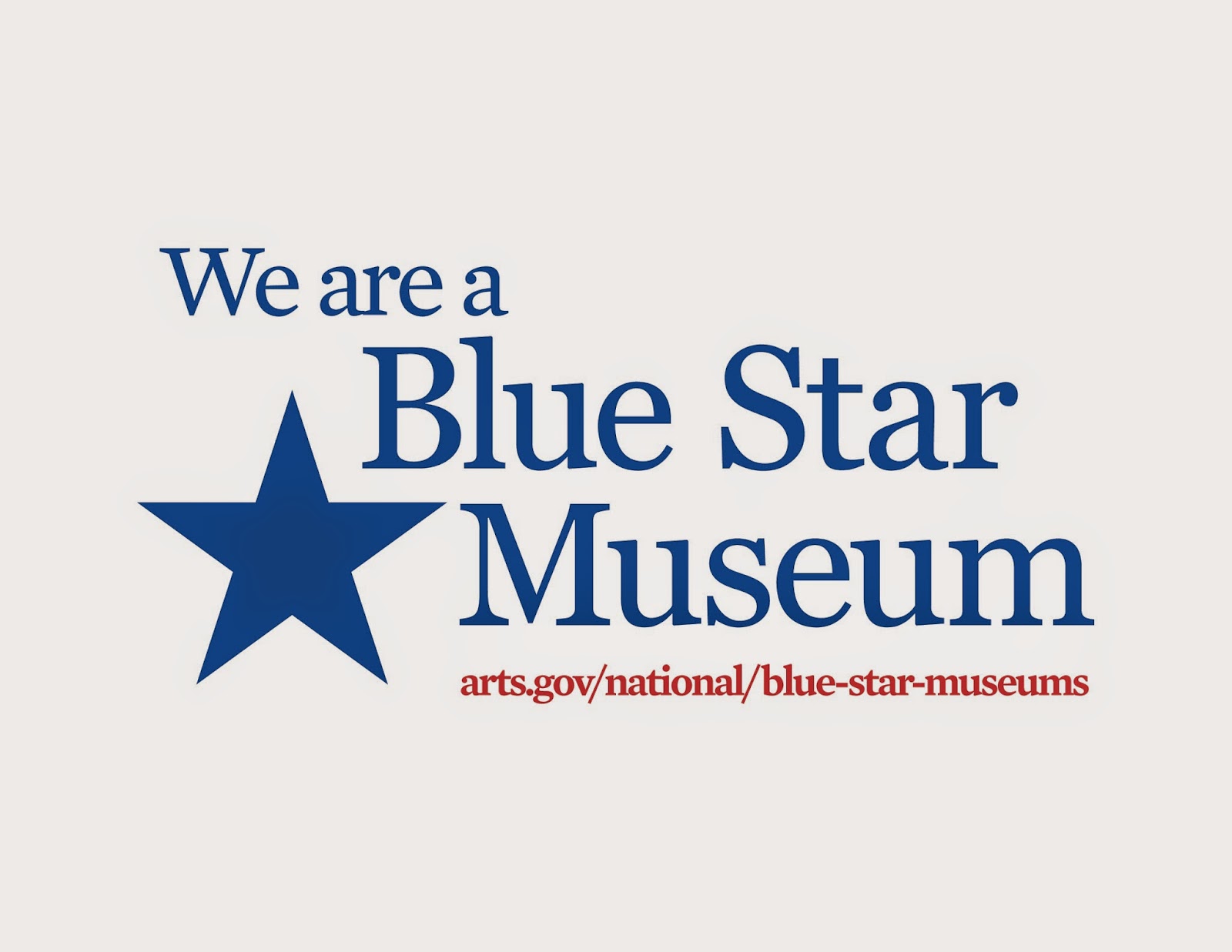 Even though the Museum is free for all (donations graciously accepted), Larry Luxenberg signed us up to become a Blue Star Museum.

Blue Star Museums is a collaboration among the National Endowment for the Arts, Blue Star Families, the Department of Defense, and more than 2,000 museums across America to offer free admission to the nation’s active-duty military personnel and their families, including National Guard and Reserve.

Becoming a Blue Star Museum helps show our support for those who serve our country and their families who keep the home fires burning.


Publicity for the Museum

The Museum (and its books) have been in the local news quite a bit lately.  Here are a few links of TV spots, and news articles related to the Museum.

The Sentinel - Four different pieces on the Museum, the trail, the ATC, etc.

York Dispatch - A writeup on Mane of Life.

Good Day PA - My piece on ABC 27.  Not my favorite thing to do, but I will always take one for the team.

I'll leave you this month with a few more interesting pictures from around the Museum.  Enjoy...

Posted by EarthTone LoGear at 9:39 AM