It may be cold and the snows may still be deep, but it will be the end of March before we realize it and another season of the Museum will commence.  The winter projects continue, but it is now time to start getting ready for our sixth season at the Museum.

Things to look forward to are a Sunday Spring Cleaning, some orientation and training sessions and the children's space in the basement developing into an interesting, hands on, exhibit that will foster a love and respect for the trail that could last a lifetime.

Clean up, orientation, Docent shifts and Road Scholar Hikes can all be signed up for at the VolunteerSpot Group Page.

On January 24th, I headed over to Bears Den Hostel at Snickers Gap, VA.  The Northern (or PA Ruck) used to be held at the Ironmasters Mansion in the past, but it has since moved down to Bears Den which is a perfect venue.  Some say that since it takes  place below the Mason Dixon line, it really isn't the Northern Ruck, but I feel that since it takes place further north than the Southern Ruck (SoRuck), which was held the week before at the Nantahala Outdoor Center in NC, it can qualify. 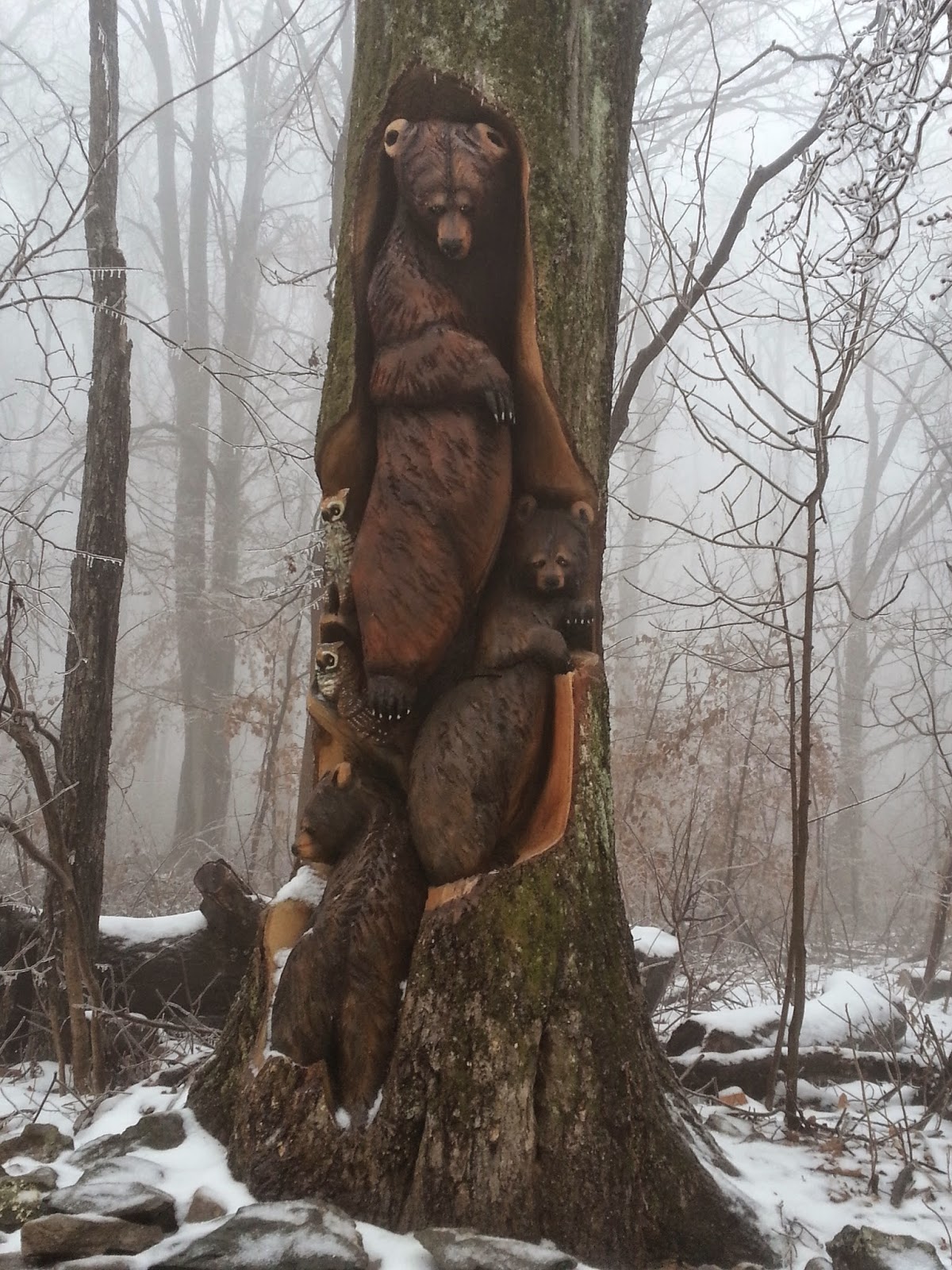 The day started out foggy and icy.  The temperature hovered just below freezing and a light rain had fallen and quickly frozen on everything it touched.  It was magical outside and nice and cozy inside.  I arrived just after breakfast on Saturday and settled in with the attendees.  All of the usual People of the Trail were there including Hippy Kippy, Wing-Heart and Yellow Shoes among others.  I finally got to meet Warrior Hiker Brian "Evac" Wing, who is a fellow Coast Guardsman.

The day consisted of eating (of course), Tuckerizing Class of 2015 Thru Hiker's packs and having presentations on various subjects like the AT Museum, The ALDHA Search and Rescue team, The Flip Flop Kick Off in Harpers Ferry and the ATC Biennial which will be happening this Summer.


One thing I enjoyed was meeting six perspective 2015 Thru Hikers.  They were a diverse group and I enjoyed talking to them and discussing their hopes, fears and plans.  I have since been in touch with each of them and I hope to follow along with them as they head up or down the trail on their epic adventure.  I hope to write stories (either here on on my other blog) about their progress as I glean it from their Trail Journals and Facebook posts.   It is interesting that most of the "types" of hikers are represented.  We have both male and female, older and younger, a Nobo going solo, a Nobo with a dog, A couple going Nobo together, a Flip Flopper and a Sobo.  Every flavor is covered.  I am very excited for them and wish each of them well.

The plans continue to develop for the renovation of the basement.  On Friday, January 30th, a group of interested volunteers met at Shippensburg University after the Annual South Mountain Partnership breakfast.  Gwen presented the plans of Graphik Masters our design team and we started brain storming ideas on how to fill the basement with interesting, interactive exhibits that will foster the love of the trail we hope every child will develop after visiting our new Children's Space.

There is still a lot of work to do and quite a bit of research and photo hunting as the plans mature.  We want to bring the interesting things that all hikers see, feel and experience as they hike the trail into the space with color, pictures and hands-on activities.  Here are a couple of crappy pictures of the design that was presented.


We will continue to update as the plans progress and we hope to have the first part of phase 1 installed in late spring or early summer, with all of phase 1 being complete by October.  Phase 2 will develop the western side of the space with "A Day (and night) in the life of a Hiker".  Still lots to figure out with that, but I'm excited that this will be a great space for children to come and experience and learn about the trail.

Update:  Yesterday, six of us braved the cold and met in the Museum which was a balmy 50 degrees inside.  I think it was about 20 degrees outside, so you could feel the difference (as long as you could still feel your fingers)

This meeting started with Greg from Graphik Masters come in and drawing a rough sketch of the exhibit on the floor of the basement.  He also answered our questions and we walked through the exhibit to get a feel of how it will work.  So far, all looks good.

Next, we did some brainstorming.  Traveling up the trail in our mind and listing things that are part of the trail that might work for the exhibit.  Gwen wrote down a lot of things (even for Connecticut).  Now, we start to refine the list (and still add to it) and then the research shall begin.

As our focus at the museum turns more intently on working with children, so will our responsibility to carefully adhere to the PA laws regarding the protection of children from abuse.  This law had been intensified and expanded to now include volunteers who work at places that cater to children, like the museum.

We are still trying to figure out all of the details of what our responsibilities will be, but it is trending towards our volunteers receiving a couple of clearances that ensures they are not or will not be a potential harmful presence to the children who visit.

The way the law is written, is a little confusing as to how it applies to our Docents, but we will ensure we do what we need to to be right with the PA Law.  Stay tuned for more information as we figure things out.  Bottom line is those who are active docents from last year will have some time until this is required and the AT Museum Society plans on paying for whatever checks are needed.

Also, if you have already gone through this process for some other job or volunteer work, your certifications should be good with us as long as they are less than three years old.

Sometime during the last season, we received a CD in the mail from a previous hiker.  The CD contained the trail journal and lots of pictures of John "Lobo" Wolf's 2000 Thru Hike.  As I read Lobo's story and looked at his pictures something dawned on me.  The Katahdin sign we have in the Museum was removed from the mountain in 2010.  The signs have a lifetime of 10 years on the mountain before being replaced.  The cover of the CD had a picture of Lobo up on Katahdin on July 25th, 2000.  As I took the picture down to compare to the museum piece, I saw that they were the same sign.  Lobo's brand new and shiny, with no initials or other carvings (yet), and ours, battle scarred and weather beaten, but standing just as proud in our Museum. 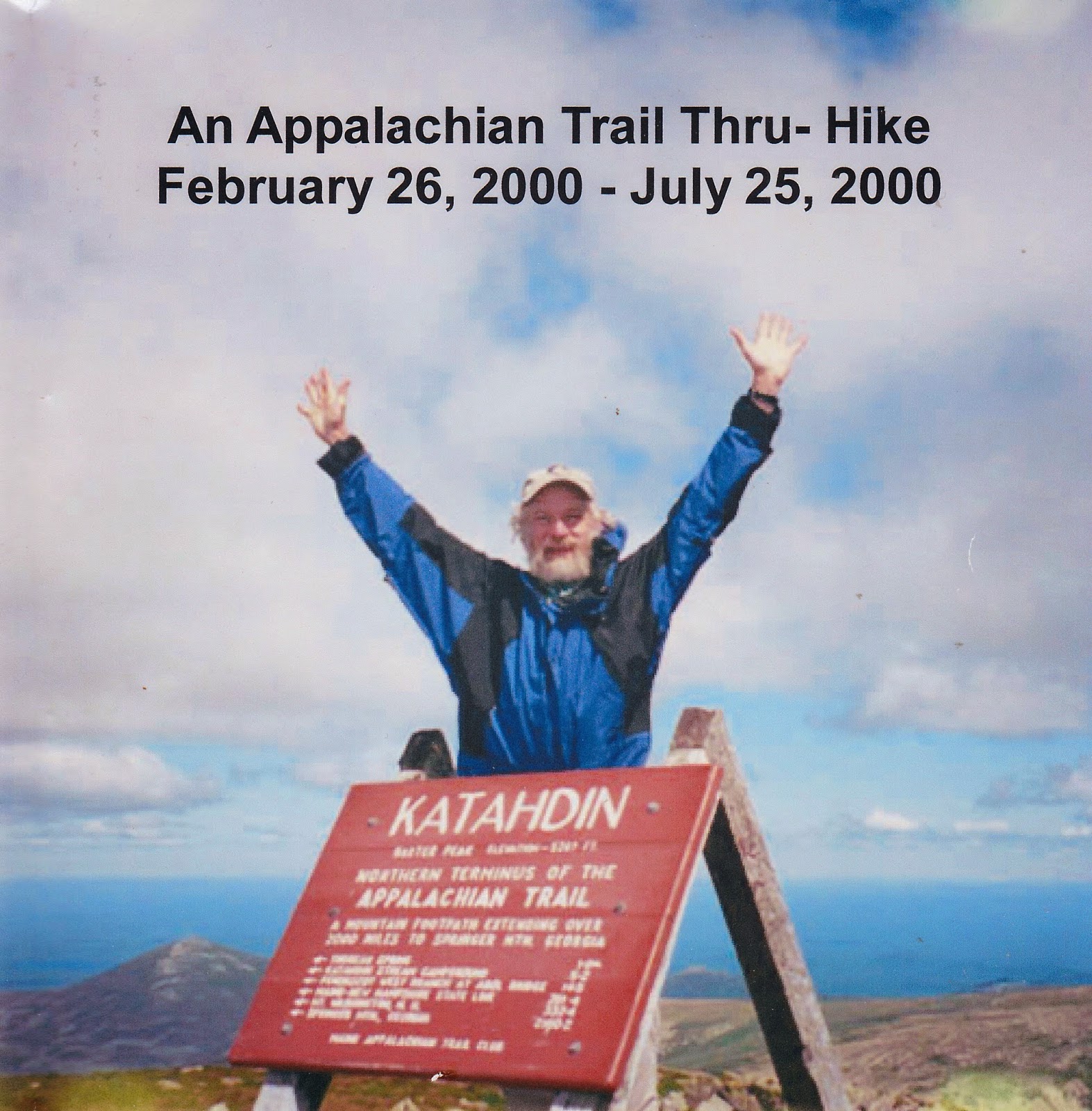 A few weeks ago I got an email from Sue Wolf, John's wife (who transcribed the whole journal from John's hand written notes sent from the trail).  She asked if we planned on posting the journal on our website.  Well, that is just what we did and you can go check it out yourself by clicking Here.  It was quite an adventure, as they all are, and a very good read.

I have scheduled the annual Museum Spring Cleaning day for Sunday, March 22nd, 2015.  We hope to start around 9 am or so and should be finished sometime after Noon.  The cleanup generally consists of general house cleaning, washing windows, setting up the merchandise area, and miscellaneous handy-person jobs.

In addition we will do some sprucing up outside the museum building including raking leaves and general clean-up, weather permitting.

This year, I'm hoping to conduct several orientation sessions in March and into the beginning of the season (if needed).  I'm trying to tailor them two different ways, one for new volunteers or those who have only served one or two shifts, and those who have served several shifts (or years) who want to go through the processes again and refresh their memories.  I hope to include intensive, hands-on practice of the PayAnywhere Application that we have been using to allow the use of credit cards.

I want to cover the whole application and have developed a training plan that handles the questions I have received about the application from Docents, including cash purchases, voids, refunds and searching for an item in the inventory list.

The Appalachian Trail Conservancy (ATC) will hold its next Biennial Meeting on Shenandoah University in Winchester, VA.  The one week event has so many things to do, it is impossible to list them all here.

The AT Museum will be conducting several workshops and also will lead an excursion up to Pine Grove Furnace State Park where participants will visit the museum, maybe take on the half-pint challenge and hike to the 2011 Halfway Marker followed by a cookout.
The Conference runs from July 17th to the 24th and is co-sponsored by the Potomac Appalachian Trail Club (PATC) and the Mountain Club of Maryland (MCM).

Posted by EarthTone LoGear at 11:02 AM