So far this year we have had over 6000 visitors with almost 1000 of them being thru hikers. Our programs have been dwindling down but mostly we've had an attendance of 10 or more for each one. Also, this week I decided to view the eclipse from Tennessee with my grandfather. The temperature dropped 15 degrees, the frogs were peeping, the clouds were more visible and the atmosphere of the sun was the brightest white glow around the moon. I also saw what I think was Venus glowing like it was one of the stars.

Here are some pictures of a few great spots to hike/climb within the Michaux State Forest.

Lots of things happening!
We will soon be continuing our road scholar hikes once again on Mondays starting on August 28th. These hikes have been a great way to meet people from all over the United States. It is also a great place to practice educating others about the trail and the environment. If you would like to learn more about what these hikes involve please contact me(Nathaniel) at manager@atmuseum.org.

The Pine Grove Fall Furnace Festival for 2017 will be held on the 21st and 22nd of October. This year we are setting up a stand for the museum next to the park. Anyone interested in getting involved please let me know via email.

We are progressively seeing more south bound hikers coming from Maine this time of the year. Most of the SOBO hikers that I've talked to have started in June. Katahdin only opened for hikers on May 27th because of the weather. I was also told that the black flies were worse this year than any other in the last 50 or so. In 2012 I did not see very many on my thru hike south.

Also, read more below about our schedule coming up the trail.


Renovations
The second and third floor renovations are looking great. Anyone who would like to get involved just let me know by sending an email to manager@atmuseum.org.

PCN Pennsylvania Cable Network
Airing on Sunday, September 3rd at 8:00 pm will be a guided tour of the Appalachian Trail Museum. On Wednesday, July 26th a camera crew came to the museum to film a guided tour led by yours truly. The tour started shortly after 9:00 am and continued until about 1:00 pm. I learned that when the cameras were not rolling I had no problems talking about all that I knew without any issues, but once the little red light let me know that I was being recorded all my thought went out the window. I did not anticipate that being on camera was going to be any different than talking to a group. This took a lot of trial and error, but I believe that all well.

For an update of when and where to find this show follow this link: ATMuseum Tour

Angry Bird Trail Stories
Last year I decided to show one of my brothers the most exciting swimming hole in Pennsylvania along the trail (Peace Rock). So we set out on the two hour drive north from home. Once we got to Port Clinton we had to walk. On the way up I decided that I was going to strap my GoPro camera to my head and record the jump from 40 feet above the water. To get to the rock we had to swim across the river and climb. That was all done with no difficulty whatsoever. 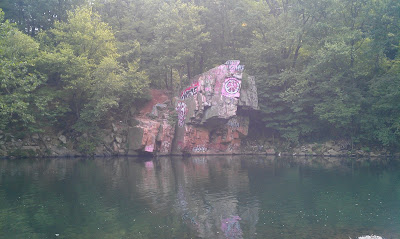 Then It was time... Press record... Run to the edge! With the camera strapped to my head and recording, I jumped!

Only a few seconds later I had felt what I thought to be a fish trying to eat my leg or a fishing net trying to latch onto my foot. As I kicked it away I scrambled to the surface of the water as fast as I could. Looking up at my brother and swimming back to the bank I celebrated with shouts and invites.

He then asked, "where is the camera?"

Hands immediately to my head I felt that the camera was gone. After a few minutes of searching, we decided that we were not going to try swimming to the bottom without some goggles. Then another thought came to my mind... What if I took a grappling hook and tried to fish it out so that I didn't have to swim to the bottom at all! Perfect!!! So we drove home and gathered up some scuba goggles, rope, and a grappling hook. The next morning we got there early before the crowd arrived and swam to the rocks. before entering the water I discovered that it was only ten feet deep where I jumped in. Then I got the grappling hook stuck on the bottom of the river. I had to swim down to get it loose. I tied the rope off above and climbed to the surface of the water below. As I swam out to the rope my heart pounded with excitement and fear all at once.

I took a short breath of air and entered the water far too quickly. Using the rope I pulled myself to the bottom as fast as I could through the cloudy sediment-filled water. I thought I would run out of air and need to take another breath before I would reach the bottom. Not being able to see two feet in front of me in the first seven feet of descent had me nervous, but as soon as I reached the bottom and I saw the hook my lungs suddenly felt full of air again. As I grabbed the hook I noticed a little blue light and there it was, still turned on with the memory card full of the recording of what a rock's point of view from under the river would be.

I did have my shirt stolen by a cleanup crew who really made that place shine, but other than that I went home with a well fought victory in my hands and a two hour recording of fish swimming near the bottom of the river.